Flicks and Re-Runs: In the Name of Love 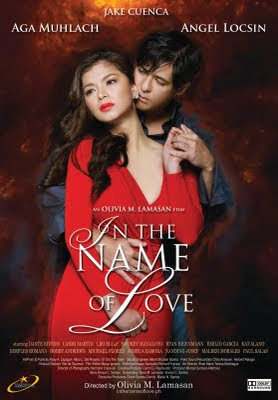 Olivia Lamasan is known for helming high-quality drama flicks like Maalala mo Kaya, Kailangan Kita,Madrasta, Milan among many others produced by the ABS-CBN film company.
In her recent venture Ms. Olivia Lamasan tries to take In the Name of Love into another level far different from the usual stuff currently churned out by Star Cinema.
The film is heavily promoted as the initial pairing of Aga Muhlach and Angel Locsin, two of the network’s brightest stars alongside rising actor Jake Cuenca.
In the Name of Love is reminiscent of the 1996 film Bayarang Puso where Aga Muhlach played a dance instructor who falls in love with his matron Lorna Tolentino.
Muhlach plays Emman Toledo a hosto (male version of a pinay japayuki) in Japan, there he meets fellow entertainer Mercedes Fernandez (Angel Locsin). They eventually fall in love. Later on Mercedes accepts an offer to launder money for the Yakuza, hoping to earn big money. Because of an overwhelming concern for his ladylove Emman volunteers to take on Mercedes’ job.
Emman is caught and is sentenced to 7 years in prison; Upon returning to his hometown he tries to put his life back like reforging his bond with long-estranged son who will soon migrate to Australia with his adopted stepfather and then opening up a dance studio.
In a familiar small world plot common in many Filipino movies and teleseryes, Mercedes is in the same town as Emman, however she is set to marry Dylan (played by Jake Cuenca) son of a corrupt and manipulative politico. Dylan is being pushed by his father to run for Vice-Mayor.
While campaigning, a disgruntled citizen nearly assassinates Dylan, he is timely saved by Emman. As gratitude Dylan offers Emman to become a dance instructor to the ball he is organizing in time for his wedding with Mercedes. And there our usual Filipino love triangle unfolds.
Just like in her past films, Ms. Lamasan tackles burning social issues in her films, like the pestering insurgency problem in Kailangan Kita and the travails of Overseas Filipino Workers in Milan. Here she gets to tackle the issue of political warlordism and the plight of OFWs turned mules for criminal syndicates.
The first half of the film, you could sense that if handled right and allowed to take its course. In the Name of Love would have become a great film but alas the film's ending destroyed whatever promised it held.
The first half had leanings of Lino Brocka, it reminded me somehow of Brocka’s Gumapang ka sa Lusak. The movie’s best part was the character of Jake Cuenca, as a spineless young man pushed into the political limelight as a virtual puppet. The movie’s thrust to tackle the dynamics of local politics is noteworthy.
Alas Star cinema is not an indie film company and would not allow its film to go the usual plot route of indie films perhaps they have Cinema One and Skyline productions for that. By some twists in the film, Aga Muhlach’s character a former convict turned D.I. unbelievably was able to destroy a well-entrenched political clan and still get his girl in a perfunctory happy ending.