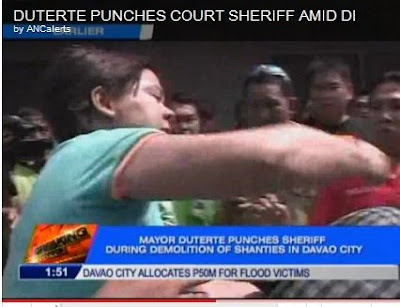 One time I covered a meeting between the City Mayor and officials of the Army's 10th Infantry Division at the old Central 911 office along Ponciano Street which was then being used as a temporary conference room.
During the media interview, the lady Mayor was asked about the city's peace and order situation, I remember not paying attention to the long-winded answer, my mind drifting off somewhere, but all I remember was her phrase "unsa man karatehin nako sila." Then to the surprise and amusement of the reporters she playfully executed a karate strike stance matching it with the yelp "hiyaaa" which elicited guffaws and laughter from the media group.
"Mangarate man jud diay ni si Mayor oh! usaba daw usaba daw. " (The Mayor really does karate, do it again) one newspaper reporter asked for a repeat.
Maulaw ko. (I'm shy) The Mayor replied returning back to her schoolgirl shy but dignified demeanor.
"Usaba daw, usaba daw, sayang wala nako nabantayan" photojournalist tatay Rene asked her to do the same pose to which she politely refused.
For a time we saw her impromptu karate stance as an isolated childish prank, a moment when she put her serious politician bearing down and showed her childish human side for a few seconds.
Last July 1, I got to see her fighting form again on TV where she sucker punched a court sheriff in the middle of a violent demolition. This time not in a display of joviality but rather blinded by rage and anger.
The incident showed to the world that we have a fighting mayor just like her legendary father. In a nutshell it showed us on television how the wild west (Davao) was won and transformed from one of the most dangerous cities in the country to its most peaceful and progressive. It was made by a dynastic succession of leaders levels apart from traditional political dynasties. These were the leaders who talk the talk and walk the walk, legends in their own right.
But I do hope that the need for these type of wild west political leaders will end soon. As a modern cosmopolitan City we need to embrace leaders that are strong not because they can engage in fistfights or shootouts but rather in their firm, incorruptible adherence to the rule of law and to the institutions which it represents.