The mass accessibility of DSLR cameras has led to the mushrooming number of enthusiasts, hobbyists and new professionals. Many in varying degree of competencies from noobs to more advance users or those already who have elevated it into a form of art or commercial venture.

“Hindi ba’t porke may DSLR ka eh photographer ka na” I once posted a shoutout in my facebook.”

Only to find out that its a knee-jerk reaction to a growing field. Though I had directed it to newbies with big egos as big as their cameras or telephoto lenses. but the phrase tends to unfairly generalize the field of newcomers

In purest terms a photographer is one who takes pictures. He can either be a veteran professional or a 10-year old novice hobbyist.

Let me share how i started into this hobby.

Even before I owned a DSLR, I was somewhat engaged in “professional.” photography since part of my job as an information officer is to take photos using the office-owned prosumer digital point-and-shooter, the photos are then to be submitted it to different media outlets. Many of my photos have come out in newspapers and news websites.

Just like some of my photojournalist colleagues, we always set our cameras to P or Automatic mode and we disdain the use of photoshops. As long as we took care of composition (rule of 3rds, angles etc.) the pics are good to go.

Tatay Rene Lumawag, Bing Gonzales, the late Edgar Arro, Seth delos Reyes, these veteran photojournalists exposed me to the wonders of DSLR and to photography plus the nuances of discipline and responsibility attached to it.

Tatay Rene would offer me an old D70 in which i could borrow to get a feel of DSLR photography. I bought a second-hand Nikon D40 to jumpstart a DSLR hobby.

“Maganda yan na camera.” Kuya Edgar would describe the D40. An entry level DSLR perfect for beginners like me. They were there to assure me that it isnt the equipment but the skills.

“Porbida, shoot ka lang ng shoot. hindi man yan film.” Tatay would scold me one day because he noticed I was not shooting often.

“Wag ka sige bili dyan. masterin mo muna yang camera mo. (don’t always buy, master your camera first) kuya Edgar would admonish me when i would ask him what new lens to buy. at that time I was addicted in buying photography accessories.

Lately some of them would remind me that I have a Nikon D90 and they havent seen me lugging it around. “kapoy dala” I would tell them. “eh akin na lang yun hindi mo naman pala ginagamit.” Sunstar fotog King would tell me (I sold my D5000 to him so i could buy my D90)

One time Tatay asked me if I was selling my D40 (I had sold it already) he said he was looking for one. I asked him why he needs a D40 when he got lots of DSLRs already.

He told me, he wants to help a young man with an eye for photography. The young lad couldnt buy a camera he plans to lend the D40 to him, if he got a camera, a job awaits him in an NGO.

It was not unusual for Tatay, he would always lend a helping hand, many of Davao’s top photographers owe their careers to his help.

Tatay was candid and sometimes brash particularly to fellow photographers. But it was not to thumb them down but to set things right.

“Telebagbag” he would scold a fellow fotog who just wouldn’t learn a thing or two about camera settings. Often he would speak his mind by commenting on the photos posted on Facebook by some of his colleagues.

I learned a thing or two about my mentors/colleagues, Practice humility. Extend your open arms to a person who would want to go to photography, encourage him, respect his gears, his style and his eye and most of all his passion.

Instead why don’t we just say. “oh may DSLR ka pala, Shoot tayo!!! 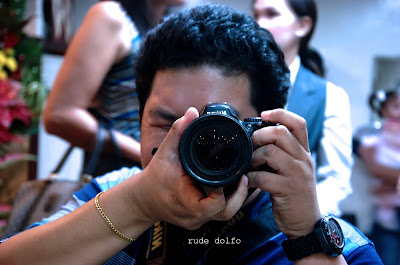