My body of literary attempts 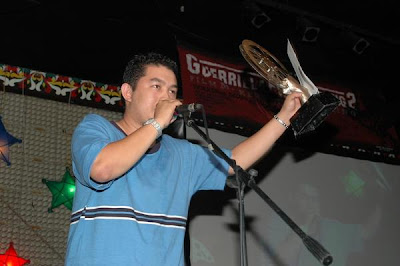 While being interviewed by a college student for his term paper on the basis that I was a fiction writer kuno! I was asked about my body of works. I could only cite two of my short stories which got printed in the literary pages of a local newspaper, completely forgetting to cite my other works which are short film screenplays and one attempt at writing a one-act theater play which I had wrote when I was still in high school , I've lost many of these copies, sigh, an attempt to document my humble body of literary attempts

The Scent of Midsummer (1994)- My first attempt at writing a one-act play, actually intending to submit it to Davao circa 1950's Playwriting contest, which involves around plays set in 1950s Davao. The story is about Arturo a high school student in a certain Davao City all-boys catholic school in the 1950s, the protagonist sets his sights on joining a midsummer school soiree, however problems with his very low grades on his chemistry subject threatens to derail his chance of joining this rare social event.

The Only Sin (2004, short film screenplay)- A Spanish-mestizo clan cursed with a vampire-like disease is thought to be wiped out by American colonial authorities in the early 1900s. 90 years later, Marco, a rising crime investigator of the Davao City Police Office is baffled by a series of mysterious killings in which human victims are sucked dry of their blood. On the personal side he is constantly wondering of the refusal of his long-time girlfriend Evelyn in accepting his marriage proposal. A series of events will ultimately connect these seeming distantly-related mysteries. That will put the police officer's heart on the line.

The Routine (2004, short film screenplay)- based on a story by Marco Tamayo. An ambitous yet jobless husband. An unfaithful wife. One family. A murder mystery.

Happy Ending 2 (2005, short film screenplay)- Story by Marco Tamayo. Another comedic film project in the vein of Happy Ending. This time a movie about straights. Chris a certified geek, a no-girlfriend-since-birth guy is enrolled by his older brother to some sort of a finishing school where one can become a certified chickboy. In time he becomes a member of the cool dudes- a posse of chick boys known for getting the hottest ladies. Chris falls in love with a member of the Hot-chicks-a clique of It girls. However Chris' dilemma begins when he finds out that she is a girlfriend of one of the cool dudes and knowing the dudes as experienced cheaters, old Chris' views on true love and fidelity gets in the way forcing him to choose what kind of man he really is.

Initial photography was started but was discontinued after we faced legal problems from the first Happy Ending shoot. In July last year, Me and Marco met in the wake of a dear friend Jonathan Porras, who was Marco's inspiration for the story.

To Cross the Line (2005 short story)- Set in Davao Chinatown, Joy, a banker is traumatized by a love gone wrong. Her series of introspections and realizations in a seemingly ordinary afternoon. First published in Dagmay, a weekend literary page for Dabawenyo writers.

The Third Republic (2005 short story)- a coup de tat has installed a military junta in Manila and across Mindanao, the City Mayor of Davao sets up to form a new government, the Republic of Mindanao. Published in Dagmay as a two-part series.

Limot (2006 short film screenplay)- a tale of forgotten second chances. the oft-rejected George masquarades as a close friend to an amnesiac Tricia, figuring out that this is his best, last and only chance to be with the girl of his dreams.

A much-deserved life (2007 short film screenplay)- An eyeball date between an artist and a daughter of a Chinoy businessman results in a realization that the life you want is not really the life you want to live.

Way to the Sunset (2009 additional screenplay and background research. full-length film, participating film to the 2nd Cinemarehiyon Film Festival held in Manila)- Based on the story and script of Bagane Fiola, the plot revolves around Nikka, a nikkei- jin (Japanese descendant) and Hitoshi a Japinoy (half-blooded Filipino) who meets up in a friendly date. A seemingly ordinary day spent around the city unravels the convergent paths of their friendship and the divergent twists of each other's fate. 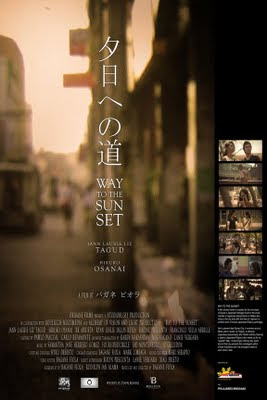