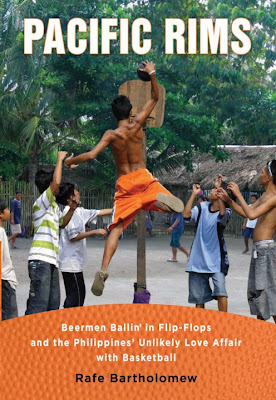 May 1993, We were seated in lower box seats at the capacity-filled Cuneta Astrodome. Game 2, PBA All-Filipino Finals between San Miguel Corporation and the then Ayala Zobel-owned Purefoods Hotdogs (then sporting the Coney Island ice cream brand). Our seats were a few rows behind the Zobel de Ayalas with patriarch Don Jaime Zobel de Ayala leading his family and a retinue of corporate executives.
As the game wore on, it was thrillingly close, Samboy Lim's daredevil drives always manages to get the dominant San Miguel crowd roaring, while Alvin Patrimonio's trademark post moves would drive Don Jaime Zobel crazy and inspire the lesser-numbered Purefoods fans to cheer for their team and equalize the screams of the San Miguel mob.
This was the glory days of the PBA, The country's richest family and the masa crowd all in one roof. Though with different team allegiances, they were united in one, their love for the game.
In 2005, Rafe Bartholomew came to the country armed with a Fulbright scholarship. His mission was to write one peculiar aspect of our culture- Pinoy basketball. Though the game is still the same as with American and international rules, it has practically evolved into a life of its own.
I've seen and read many attempts on redefining the Philippines and Filipinos taken from a western perspective, that would include foreign-raised Filipino-Americans like Mike Bustos, Christine Gambito of Happy Slip, Tim Tayag etc. But Rafe Bartholomew's Pacific Rims is unique since it aims to dissect our culture through Basketball, which was never really comprehensively written about.
Got his book recently on paperback at National Bookstore and was able to consume it for three days. As a basketball geek particularly a follower of the Philippine Basketball Association, Pacific Rims is a total page-turning revelation particularly his accounts of the Alaska Aces PBA team during the 2007 season where he was taken in as an observer.
From the clownish Willie Miller, the farting Poch Juinio to the seriously stressed import Roselle Ellis; Pacific Rims takes us to the inner dynamics of the winningest PBA team known for its uncompromising blue-collar ways.
All these years I've grown to hate Alaska team for frustrating my favorite team, the Purefoods Hotdogs particularly in several PBA finals during the mid-1990s. but the book somehow tore out a heart for the team which represents the ghost of PBA's glory days (yes I believe the league is on a serious decline).
The book also tries to telegraph the Filipinos love for hoops and how we had transformed it into something that is a part of us. Connecting our nation's history with the evolution of the local game. The author takes his readers on a whirlwind tour of pick-up games and court-side views peppered with different commentaries from different resource persons like sociologists, politicians, sportswriters, business executives and former players.
Involving and funny peppered with Bartholomews observant wit plus some unexpected twist including the time he was asked to act in GMA 7's telenobela Bakekang. Pacific Rims: Beermen Ballin' in Flip-Flops and the Philippines Unlikely Love Affair with Basketball is a great bookstore find.