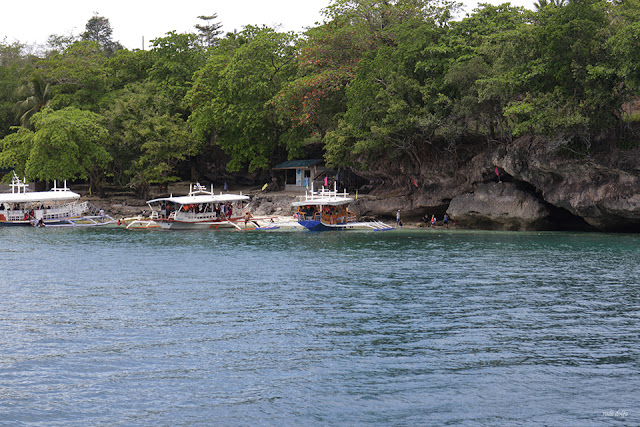 My most memorable moment with the Davao Digital Influencers group was the island-hopping tour in Samal courtesy of Wayph Kaiser Mangampo.

The trip took us to  Talikud Island which is a 45-minute boat ride from Sta. Ana Wharf. The highlight of the trip would be a pit stop at  Isla Cristina or Isla Costafba located in Sitio Cogon, Talikud Island.

Isla Cristina was formerly a part of the 400-hectare Reta Estate, the family which owned the popular Isla Reta resort in the northwestern tip of Talikud. Sometimes it is called as Isla Reta 2, referring to the popular beach resort in the island owned by the Retas.
The estate was put under the Comprehensive Agrarian Reform Program and Isla Cristina was distributed to agrarian reform beneficiaries. Thus the 'proper' name of the beach resort is Isla Costafba  (Cogon, Sta Cruz Farmer Beneficiaries Association).

The beach is tucked between two coves. On one part of the cove is a beach cave large enough to fit about 20-30 people at its mouth and is considered as one of the attractions in Isla Cristina.

It was one of the rare times I get to meet the DDI group. It was a perfect opportunity for me to bond with the bloggers and influencers who are shaping Davao's online scene. Working with the Philippine Information Agency where our trust is reaching out to the digital community for partnerships in pursuit of the goal of nation building, forging friendships with the influencers is a big step forward for future collaborations.