A few years back I was tapped by the City Tourism Office in brainstorming for a video commercial.

Anna Concepcion along with her barkada are planning their annual vacation. One of them suggests going to Davao City, to which the group agrees except for Anna Concepcion.

"The best way to experience Davao, is to visit it!"

The video was a play on misconceptions about Davao which had prevented several "Miss Concepcions" from visiting the city.

In the past  one would invest in TV commercials or advertisements to attract tourists. These ventures are costly to produce and to place them in various media.

With the internet and the unprecendented growth of social media via mobile technology like smart phones, tablets, laptops, cameras etc. Debunking these misconceptions would rely on a new generation of digital influencers.

Digital influencers are a specific set of people with the capability to create an effect, change opinions and behaviors and make quantifiable outcomes through their activities on the internet and social media.

Mayor Carlo Rabat of Mati City had recognized the role of influencers and is among the first local government officials to initiate marketer influencing. Instead of producing tourism ads he decided to entice young people to become influencers for Mati,  To promote their fabled Dahican Beach he supported the holding of an EDM event Summerfrolic.

The partygoers on Summerfrolic shared photos on Facebook and Instagram or blogged about the event. These posts attracted  multitudes of visitors to Mati during the next holidays.

In another case, they billeted visiting actress Kathryn Bernardo to a villa in Dahican. Ms. Bernardo woke up facing the beautiful Dahican sunrise, naturally she grabbed her phone, photographed the sunrise and the surrounding seascape and posted it in Instagram, voila a marketing coup.

There are perhaps a thousands of influencers in Davao City either through their blogs, online news media or social media accounts their impact is noticeable. One perfect example, Davao City Mayor Rodrigo Duterte was elected as President despite being the lowest elections spender among the other candidates. his candidacy pushed by an aggressive army of digital influencers.

In the future there will be a beloved city to promote, an advocacy to promote and there will be various causes to fight for. With a growing population going online, the the number of influencers must not stagnate, it must be dynamic, growing in the rapidly changing times.

The establishment of the Davao Digital Influencers Inc whose members comes from a wide spectrum of digital media practitioners mirrors the changing landscape of digital media, a dynamic platform one which contribute not just for the betterment of themselves but also of the community as well. 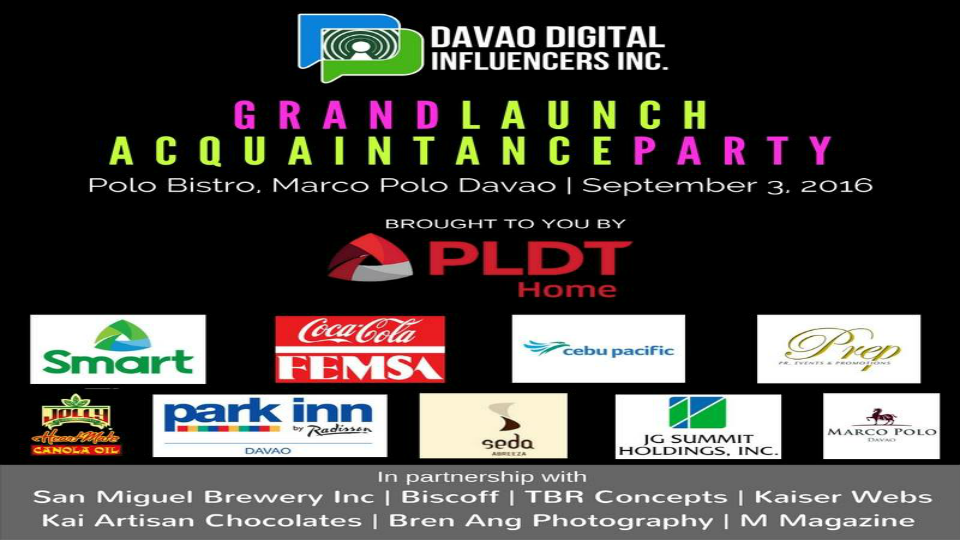 Thank you to our generous sponsors for supporting Davao Digital Influencers, Inc.

PLDT HOME is the country’s leading broadband and digital services provider that allows seamless, simultaneous streaming in all your devices at home. Enabling moments that bring your family closer together, PLDT HOME offers Fibr, DSL, Ultera and Telpad services.

PLDT brings you the finest options when it comes to telecommunications solutions. Whether you need high-speed Internet connection, a landline or a combination of both, PLDT HOME has the right package for you.

Coca-Cola FEMSA is the largest franchise bottler of Coca-Cola products in the world. The Company has 63 bottling facilities and serves more than 358 million consumers through more than 2,800,000 retailers and over 100,000 employees worldwide.

Locally, the Coca-Cola FEMSA Philippines operates 19 plants and 53 sales offices and distribution centers across the country. It has operates two plants and one Distribution Center in Davao. The first plant was established in May 1950 and is located along MacArthur Highway. The second plant is located in Barangay Darong, Sta. Cruz. Collectively, both plants employ around 350 associates.

The Davao Digital Influencers Inc. is supported by Cebu Pacific, the largest airline operating flights to Davao. It offers seat sales that go as low as P599 all-in, and a network that spans Asia, Australia, the Middle East and Guam. It operates direct flights from Singapore, Manila, Cebu, Iloilo, Bacolod, Cagayan de Oro and Zamboanga to Davao. Book now through bit.ly/DavaoCEB or call 7020-888. The latest seat sales are also up on Cebu Pacific’s Facebook and Twitter pages.

Smart brings together the Eraserheads to go all out for a new, complete prepaid offer: the ‪#‎SmartAllOutSurf 30!

This is the first complete call, text and data offer for Prepaid! For P30, prepaid subscribers get 2 days of: