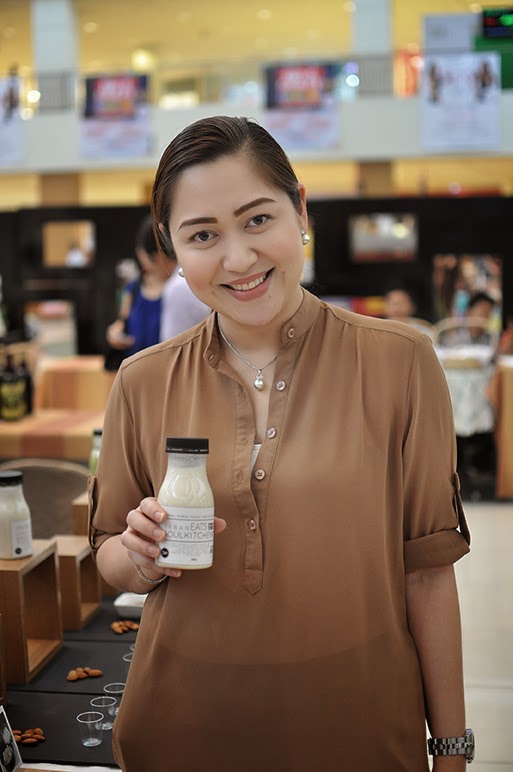 Soul Kitchen and Co. is a home-based kitchen concoction enterprise by Mimi Vergara Tupas (@pinkmother) which is currently earning raves for her line of cold-pressed fruit and vegetable juices created from her slow-pressed juicer.

It just started in February 2014 and Mimi estimates that she has pressed and sold nearly a thousand bottles of juices.

Mimi says these juices can complement meals or for those on the diet can be meal replacements. However despite the healthy lifestyle aim of her juices and other kitchen creations she is not a hard-core organic nor a vegan lifestyle disciple and yes the Tupas family still eats lechon or pork meat at least once a week.

She says the concoctions were meant to jumpstart a healthier lifestyle. It also satisfies her passion of wanting to serve something healthy for her family which she now wants to share to the public.

Once a die-hard coffee lover, she realized that the energy she gets from coffee could be sourced from the juices. She says her caffeine intake drastically reduced when she started juicing.

Aside from juices she also has the ALMONDMYLK line of  healthy drinks (Almondchoco, Almondsoy and Almondcoco) the almond mix are abundant in protein, vitamins, minerals, anti-oxidants, phytochemicals, healthy omega fatty acids and living enzymes.

“Whatever I want to serve.” Mimi describes the ideas behind the current line of Soul Kitchen and Co. Along with the juices and ALMONDMYLK she also prepares and sells pestos and meatloaf plus the popular chunky chicken cream, which has become a hit among clients.

The products she says are vetted and approved by her husband Jun and their children Uno, Yllana and Ysabella.

Asked if she intends of putting up a regular store to sell Soul Kitchen’s line of urban eats and healthy drinks.

“Kapoy na magtayo ng tindahan.” (Its so tiring to set up a store) Mimi replies. The couple has their hands full running the three Soul Lifestyle boutiques plus three pet parlor branches and a pet hotel (One Fab Pooch). Plus she says the Soul Kitchen is a sub-brand of Soul Lifestyle a clothing store the couple established in 2007.

Mimi says juicing itself takes a lot of time, in the early days, she used to press on Tuesdays and Thursdays but now with increasing amount of orders she presses for three to four days a week.

The press is dependent upon order, she makes the juice as fresh as possible as it has only a shelf-life of 48 hours. During the organic fair at Abreeza where they had a stall, the staff takes the orders from clients mostly walk-ins and Mimi goes back to the house unto the kitchen to begin pressing.

It could have been a thankless, backbreaking work except that Mimi assumes the role of a kindred kitchen spirit. She says juicing and cooking was her sort of therapy during hectic days.

Apart from kitchen duties Mimi takes time to promote Soul Kitchen on social media (Facebook and Instagram). Word of mouth is helping to hike the demand.

For orders you can text Soul Kitchen and Co. at 0917.704.8060 or email at soulkitchencompany@gmail.com
Facebook/Soul Kitchen Co.