I was getting ready as a co-curator for the Mindanao Film Program in the Cinemarehiyon Film Festival held from Feb. 18-22 in Cagayan de Oro, when a call came.

Ariel, who regularly reads my Sunstar column offered me an opportunity to cover the 7107 International Music Festival in Clark Pampanga on the 22nd to the 23rd.

7107 is perhaps one of the biggest international music festival to be staged in the country with several well-known international and local music icons. Admission prices to the 2-day event is worth P10,000 (General Admission) and a whopping P25,000 for VIP.

The media coverage is courtesy of Smart Communications which jetted in a select group of entertainment and lifestyle writers to the former US Air Force base.

So after finishing my curator duties at cinemarehiyon I took off from Laguindingan Airport in Misamis Oriental  to Cebu then taking the flight to Clark where A-class accommodations awaited us courtesy of Smart.

The telecom company is one of the major sponsors of 7107, which during the festival showcased its newest mobile application Spinnr, the country’s first mobile-based all-in music service. Where you can listen (by streaming) or download top radio hits or hard-to-find music from Spinnr’s 3-million title music catalogue.

Indie record label Terno Recordings contributed much to the local bands in the festival led by Radio Active Sago Project and Up Dharma Down followed by fast-rising acts like Maude, Yolanda Moon, Sleepwalk Circus, Hidden Nikki, Children of the Pilgrimage, Encounters of the Yeti and Skymarines which is the stage name of Isa Belle Aniga a Dabawenya who is making waves in the indie music scene with her catchy synth pop music. 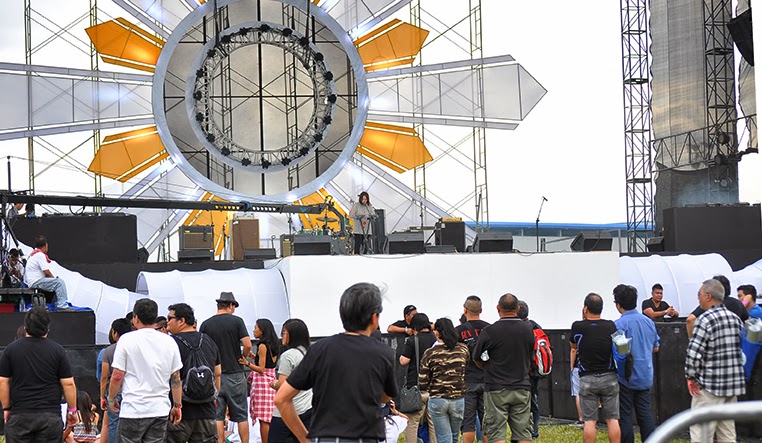 I first caught Skymarines when she provided the musical scoring for the 2012 Mindanao Film Festival Best Film “Sintunado”  she again scored for a MFF short film “Afterdark.” and now the talented Dabawenya is rapidly expanding her  legion of fans.

The venue of the concert is the sprawling Global Gateway Logistics City just near the Clark runway. The mixed used logistics and business center is touted as the country’s first aerotropolis.

The crowd came in trickles by the first day but grew bigger as the day wore on, The Natives, rapper Kid Ink, The Asteroids Galaxy Tour were among the featured performers that fine sunny afternoon. On the second stage for local artists we managed to catch Motherbass, Wilderness, Runmanila, Techy Romantics and Taken by Cars.

Though I have never heard some of these bands before, it was a pleasant experience listening and develop a liking for these bands, particularly mentioning  electro pop band Techy Romantics.

According to their website, Techy Romantics is a band which started in 2008. The band is composed of Camyl Besinga on vocals, Ryan Villena on guitars and Dondi Virrey on rhythm and beats.

As one concertgoer said, this is a great chance to discover unknown indie bands aside from having to meet international music celebrities.

The first day of the festival culminated with a great set from House legend Kaskade that turned the Global Gateway field into one big House party.

The second day of the festival, the crowds were much larger as many came to see rock legends Red Hot Chili Peppers- undeniably the main draw of 7107.

But local acts also came to town to impress their audience, Up Dharma Down soothed the afternoon crowd, rappers Abra and Loonie had their share of followers. Rocksteddy and Itchyworms also performed their hits.

By the evening Red Jumpsuit Apparatus, Kendrick Lamar came with great sets to prep up the crowd.

The Empire of the Sun’s set was a blast performing with their trademark theatrics, which reminded me of David Bowie and Prince and in some parts the Pet Shop Boys. 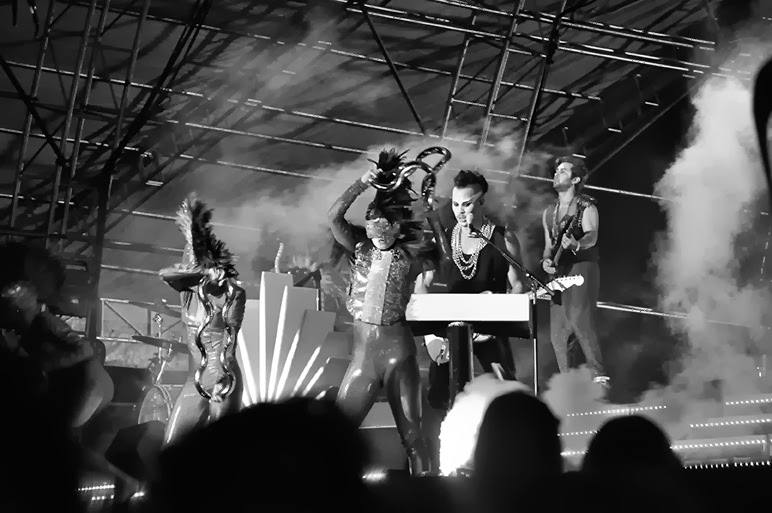 The concert is a hallmark of precision as the bands followed the strict scheduling, thus we just waited for a few minutes after the Empire set for Red Hot Chili Peppers to come on stage.

The rest of the night was magical as the RHCP with front man Anthony Kiedis, iconic bassist Flea (Micheal Balzary), guitarist Josh Klinghofer and drummer Chad Smith started the one-hour and 30-minute set with their 2002 hit "Can’t Stop." 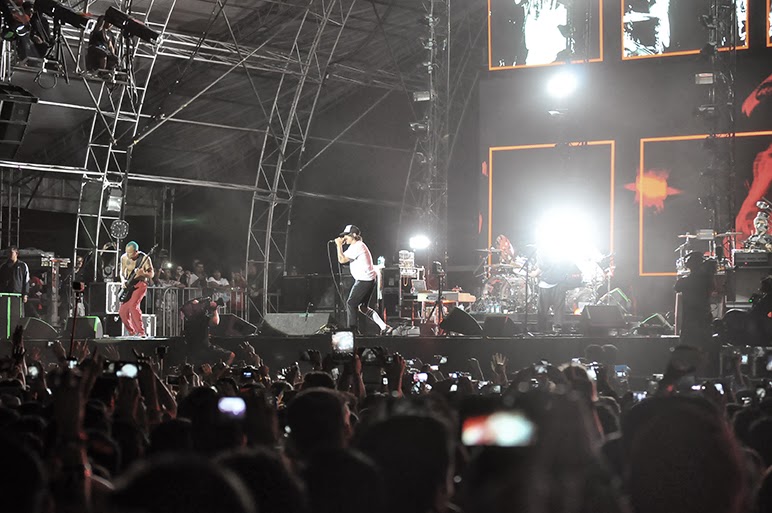 Among the hits which they churned out that memorable set were their classic
"Under the Bridge" and "Soul to Squeeze" which brought me a sense of high school nostalgia, the band also performed their hits like “Californication,” “Dani Californi,” “Snow,” “Otherside” and the set-ending “By the Way.”

With the constant cheer of the crowd the band returned to perform three more songs that culminated with “Give it Away.” And that fittingly capped the two-day festival.

And as a fitting ending, the crowd was mesmerized by a spectacular fireworks display that lit up the clear nighttime sky over Clark. Despite its share of controversies, 7107 was able live up to the expectations of many. A great weekend indeed.