Every year, sort of a panata, I would watch at least two Metro Manila Film Festival films during its theatrical run which starts on December 25 running up to at least a week. This 2013 MMFF I was able to watch 10,000 Hours and Boy Golden. 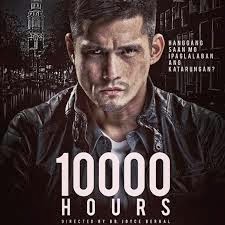 It is loosely based on the story of Senator Ping Lacson who became a fugitive for more than a year because of his alleged involvement in the murder of publicist Bobby Dacer and his driver Emman Corbito then returning to the country after the arrest warrant was lifted by the Court of Appeals.

In 10,000 Hours, Robin Padilla plays Senator Gabriel Alcaraz, a former police official who earns the ire of the powers-that-be led by the sitting Philippine President and a small cabal of police and military officers for his threat to expose their shenanigans. The clique resurrects an old rub-out case to pin him down, but before they are to arrest him, Senator Alcaraz escapes to Amsterdam where he tries to find a former police asset, who is a vital witness to the old case.

The film has an ambition reminiscent of the successful widely-acclaimed action drama On-The-Job- a new class of a Filipino action film, cerebral, gritty and socially relevant. But for me it falters particularly it had a confusing back story as to why the senator became a fugitive of the law.

First the film does not clearly establishes the cause of the Senator's decision to escape. The rub-out case (inspired partly from Sen. Lacson's Kuratong Baleleng rub-out case) was ill-defined, particularly since as the film's flashback scenes suggest it was a genuine warehouse shootout and not a one-sided rub-out.

The President's corrupt ways was not highlighted well enough and the Senator's decision to expose them seemed a little bit buried as the film became disjointed. If I were the writer and director I would have taken the liberties off from Senator Lacson's story, just portray a fictional principled Senator willing to nail down a nefarious chief executive but in doing so has to flee the country to escape the President's evil machinations. and not to peg it into one real-life person which perhaps hampered the plot.

It could have been a great political thriller like Chito Rono's 1995 Martial Law film "Eskapo."  10,000 Hours felt confusing and watered down  which to me turned the exciting premise to somewhat boring which was not help by crappy action sequences.

Robin Padilla's attempt to play a more cerebral  and savvy action hero is a refreshing change from the rough-in-the edges action hero he used to portray, and uses his competent acting chops to go with it. Best performance goes to Pen Medina as the cynical  former police asset. 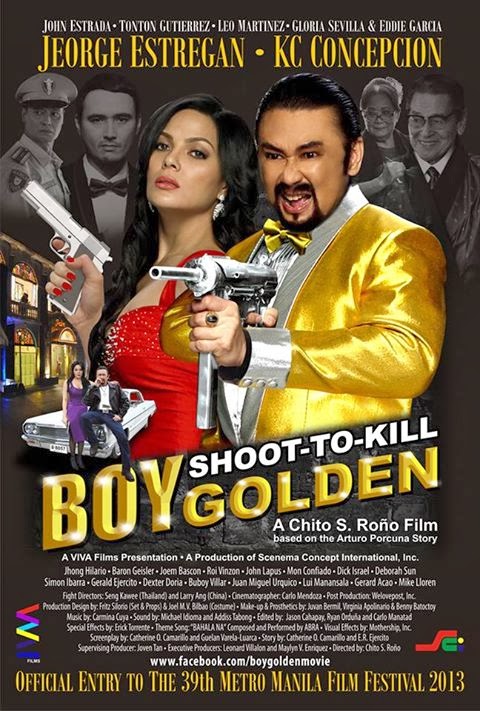 Based on the life of 1960s Manila gangster Arturo Porcuna. The period action drama is fun-to-watch with quirkiness and aesthetics not before seen in mainstream Tagalog movies for a long while, reminded me of Kakabakaba, Temptation Island, Joey de Leon's Batman en Robin and Roderick Paulate's Bala and Lipstick.

This is not a comedy film, but rarely do you see Pinoy action films genuinely entertaining. It revels in its camp and excesses right from the opening sequence, a shoot-out in the bar with Elvis Presley's Blue Suede Shoes playing in the background and a lumbering elderly walking in the middle of the bar oblivious to the mayhem.

The plot would have been the setting of a typical all-out serious movie (the comedy would be supplied by sidekicks and the courtship scenes of a tough-hearted leading lady) but this is the rebirth of a different pinoy action movie, something fresh, something unexpected.

In the film Boy Golden, the leader of the Bahala na Gang tries to exact revenge against rival gangster Tony Razon and his ilk, in the process he joins forces with a fighting lady named Marla Dee.

Governor ER Ejercito has been generous with both his cinematic ambitions and budget, first there was Asiong Salonga next was the Gen. Emilio Aguinaldo biopic. In the hands of Chito Rono, Boy Golden is treated with a one-of-a-kind glow mixture of camp and film noir ably aided by a unique period production design and inspired cinematography.

The movie was overlong often lacking in focus but held together by riveting twists and romps of cinematic zaniness.

KC Concepcion is a gem in this film, portraying a reluctant assassin equipped with an array of kung fu moves.

Jorge Estregan Jr. lacks the charisma and the acting chops needed to be a Pinoy action star, though his father George Estregan and uncle former President Erap were acclaimed actors with numerous acting awards. But Boy Golden utilizes the angst which popularized the actor as a villain in the 1990s,  to us kids who grew up in that decade he was the resident "buang-buang" the psycho villain with the maniacal laugh and devilish behavior who tormented adult action stars and kiddie superheroes with aplomb.