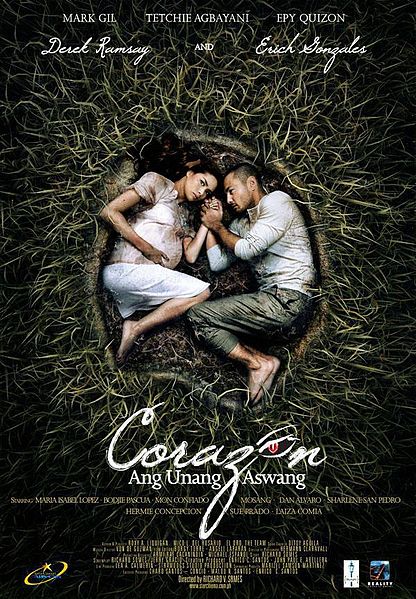 Corazon Ang unang Aswang tries to put a new perspective on the origins of the aswang, A shape-shifting creature who preys on the flesh of young children.

The film is set in a rural barrio just after World War II. A period of reconstruction when the villagers are trying to deal with the scars of the war and at the same reconfronting their old problem, a ruthless haciendero named Matias played by Mark Gil who wants to sell the farmland.

This seething agrarian conflict provides the backdrop of the story, a childless couple Daniel  (Derek Ramsey) a farmer and his wife Corazon (Erich Gonzales) lives in the barrio but the relationship with their neighbors is testy as Corazon is looked down upon by the villagers being the daughter of a whore.

Desperate to have a child, the couple approach a healer who tells Corazon to venerate a certain saint for two weeks. Subsequently Corazon gets pregnant but delivers a stillborn baby which eventually pushes her to insanity becoming an efficient killing machine, nearly wiping out the children of the village as part of her revenge for the fate that had befallen her.

Visuals is the film's very few strengths. the cinematography was stunning particularly during the forest sequences, the autumn-like golden hues in some sequences of the film was a picturesque sight bordering on poetic.

Erich Gonzales acting is also another plus advantage, she seemed natural at being natural, a persona that commands sympathy without going overboard with acting histrionics. Derek Ramsey, if given with the right projects could become the next Richard Gomez- a matinee idol with the inherent magnetism and rough edges not like those antiseptic personalities we see being churned out by mainstream studios 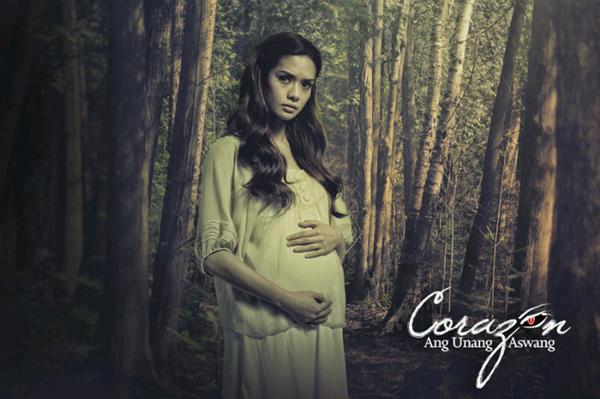 Mark Gil provided another competent work as the haciendero and so is Epy Quizon as Daniel's bestfriend but is sometimes hampered by weak dialogue and awkward scenes.

The biggest flaw must be the story, Corazon was an ambitious material but it bogged down because there was so many subplots and many themes that they had wanted to tackle, in fact you wouldn't know where the film was heading. Was this going to be a horror film with romantic leanings or a suspense drama with a socio-political message? Alas  the ending didn't tie the loose ends opened in the film.  The narrative flow was confusing with so many loopholes

The film's second half reminded me of the French film " Le Pacte des Loups" (Brotherhood of the Wolf) which is a fresh retelling of the werewolf concept. Except that in Le Pacte... the killer creature was a trained African Lion while in Corazon, a shy, demure barrio lass becomes some sort of a one-man commando, killing children and terrorizing a village all in a span of maybe a week.