Last Monday, we were invited to a lunch at Roadhouse cafe in SM-City Davao. The sumptuous luncheon along with members of the local media was tendered by SM Hotels and Conventions, a wholly-owned SM subsidiary to update us on their flagship project in the City.

SM Hotels and Conventions vice-president for sales and marketing Lourdes Malindong informed us that Davao City will be having an SMX soon, tentatively by first quarter of next year 2012.

SMX is one of the country's largest convention center. a state-of-the art venue for conventions, trade events and exhibitions, parties and other civic activities. The first SMX was built in the Mall of Asia or MOA with a leasable area of about 9,000 square meters.

The SMX in Davao will be the centerpiece of SM Lanang. It is smaller in size with a leasable area of 5,400 square meters (can be split into three halls with a maximum capacity of 1,800 people each) if combined it can accommodate about 5,000 plus people. This undoubtedly is the largest convention center of its kind in Mindanao. 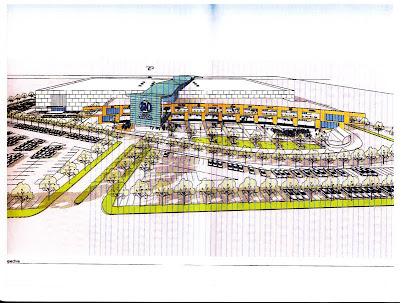 Davao City despite being one of the highly-urbanized cities in the country lacks civic facilities like large sports complexes and convention centers. The biggest convention facility of Davao City is the Central Bank Convention Hall which can only accommodate 2,000 people. Large conventions usually has about 5,000 people in attendance. one of the reasons the City cannot host large gatherings like the Ad Congress.

SM's plan is to make SM Lanang a one-stop convention complex where people can also shop, dine and sleep. Inside the complex to be connected by walkway is Park Inn of the Raddisson Group, Park Inn is a 204-room hotel known for its radically hip and trendy design. It is the first hotel of its kind to be constructed in Southeast Asia. The hotel would be opened in 2013.

With these developments, expect Lanang area to become the convention capital of Mindanao, adjacent to the SM property is the planned Davao City International Exhibition and Convention Center put up by a group of Filipino-Chinese businessmen. The facility can accommodate about 3,000 to 4,000 people.