Philippine basketball: The road to glory 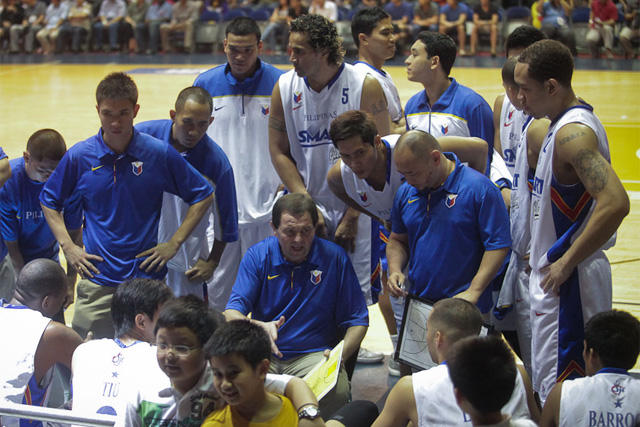 It was a heartbreaking finish. The Smart-Gilas Philippine Basketball Team was leading for 38 minutes of play, until South Korean gunners rack up two consecutive three pointers to ultimately snatch the game from us, the score 70-68.

A day earlier, in a battle for the finals slot, a well-disciplined Jordanian team, whom we beat earlier, got their revenge in the most pivotal game of the FIBA-ASIA tournament beating our team soundly 75-61.

The FIBA-ASIA Championships for Men formerly the Asian Basketball Confederation Championships (ABC) is a biennial basketball tournament which seeks to crown the best basketball team in Asia. The Philippines being the premiere basketball power in Asia won four crowns from 1960 to 1973, then China went on to win 1975 to 1983, afterwards the Pinoys won it in 1985 (the last time we won the championship), then again China from 1987 to 2005 (with South Korea winning it in 1997). Iran with 7'3" center Hamed Hadadi won the last two editions from 2007 to 2009. 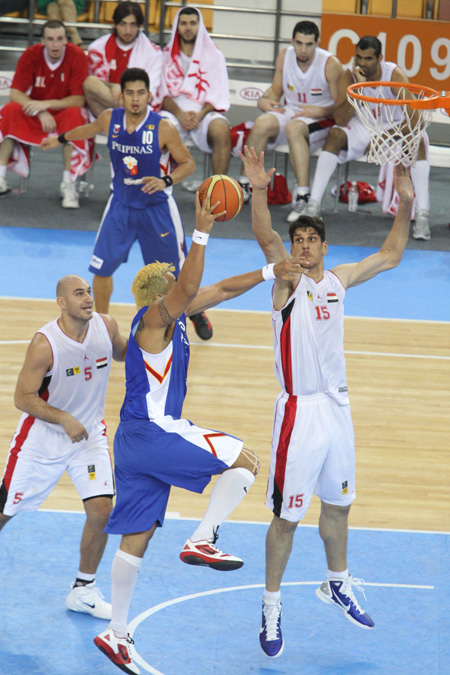 Our slide from being a basketball power can be traced when the Philippine Basketball Association was formed in 1975. The professional league prevented the country's best basketball players in representing the Philippines in international tournaments. 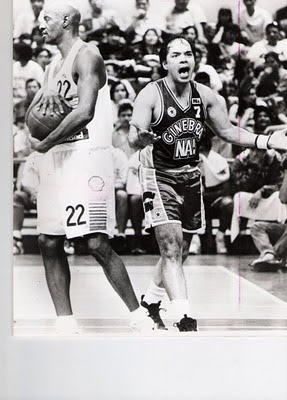 It was only until in 1990 when we sent a hastily-formed basketball team made up of PBA stars coached by Sonny Jaworski to the Asian Games where we got the silver. But it was a wake up call. The country's best players are no longer Asia's best, the last time the country got a medal in an Asian tournament was 13 years ago when another PBA selection under coach Tim Cone got the bronze in the 1998 Asian Games held in Bangkok. 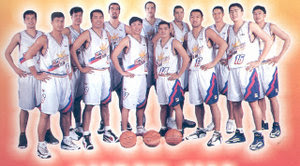 Because of severe incompetence the BAP was suspended by the Philippine Olympic Committee (POC) and a new basketball-governing group the Samahan Basketbol ng Pilipinas or the SBP was organized.

The country was suspended from further participation in FIBA (world governing basketball body) sanctioned tournaments from 2005-2006 following the feud between the BAP and the SBP.
After the suspension, the country sent PBA basketball players in 2007 and 2009 Asian championships, however to our shock and surprise, teams which the country used to beat up are now Asian powerhouses, Iran won the 2007 and 2009 championships while the Philippines had 7th to 8th place finishes.

A long-term national basketball team was formed to be bankrolled by tycoon Manny Pangilinan, its mission was to win the 2011 FIBA-Asia championship, where the champion would get a slot in the London Olympics.
Named after an internet literacy program of Pangilinan's telecommunications company, Smart-Gilas featured several top amateur basketball players among these included UAAP hotshots, Jayvee Casio, Chris Chiu and Mac Baracael. they were reinforced by Fil-Americans Chris Lutz and Marcio Lassiter and a naturalized American big man which after several choices the team settled for former L.A. Lakers draftee Marcus Douthit.
I had closely followed the tournament and cheered for the team for every victory and defeat. the 4th place finish in the tournament was the highest after 24 years in FIBA-ASIA championship. And the best for every Asian tournament since 2002.

The after the setback, a series of realizations and lesson came for many of us fans and observers of Philippine basketball. 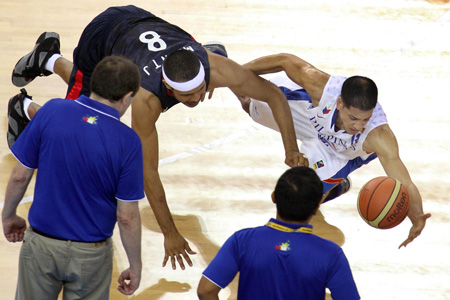 First is that the Middle East countries are getting bigger and better. Iran, Jordan, Lebanon have bigger players owing to their natural Middle Eastern physiques. They now move fast and are very athletic, they are also good medium and long-range shooters. These big fundamentally sound, athletic players have created match-up problems for us in the court. 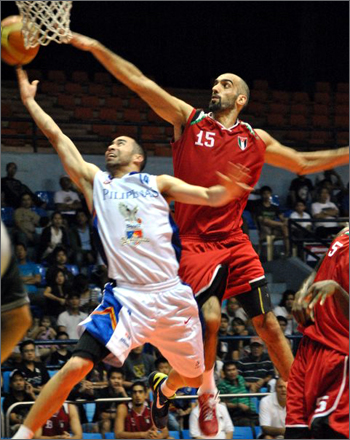 One remedy is to look for Filipino big men and continually develop them. 6'9" Japeth Aguilar was hardly used in the crucial games owing to his poor performance in important games. We have 7-footer Greg Slaughter who will be part of the next Smart Gilas team another giant is 6'10" Cebuano college star Junmar Fajardo, I believe there are a crop of Filipino giants out there waiting to be discovered. 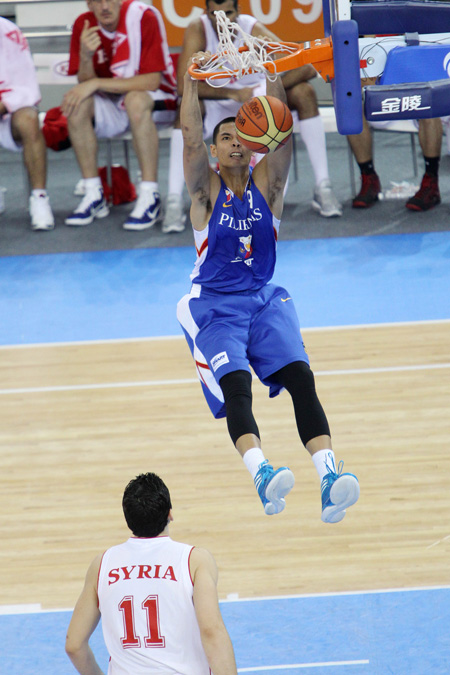 Shooting skills- The country lacks consistent outside shooters, the last Pinoy hoop gunslinger was perhaps Allan Caidic. During crucial situations countries like Japan, Taiwan, South Korea and China would turn on to their outside gunners like Japan's Takuya Kawamura and China's Sun Yue. This was what happened during the Philippines vs. South Korea bronze medal match where the Koreans simply ran plays for their three-point shooters. 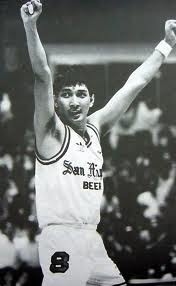 The lack of Philippine shooters could be traced to our style of basketball which involves slashing towards the hoop and other flashy plays, similar to American-style of basketball. However it creates problems when the country takes on larger teams similar to China and teams with very good fundamentals like Iran and South Korea.

Another realization is that we must send the best we have and training them into one cohesive team. The Smart Gilas team was made up of collegiate stars plus some PBA reinforcements, however it could have been different if we send an all-PBA selection under national team coach Rajko Toroman. The Serbian coach who led Iran to their 2007 championship has done wonders with the current line-up of Smart Gilas, what more if he had the best Filipino cagers under him.

But it is easier said than done, the PBA is a business entity, it has its own commercial interests to protect, it had sacrificed a lot when it sent teams to Asian tournaments. But then there is no interest greater than doing it for the Philippine flag. 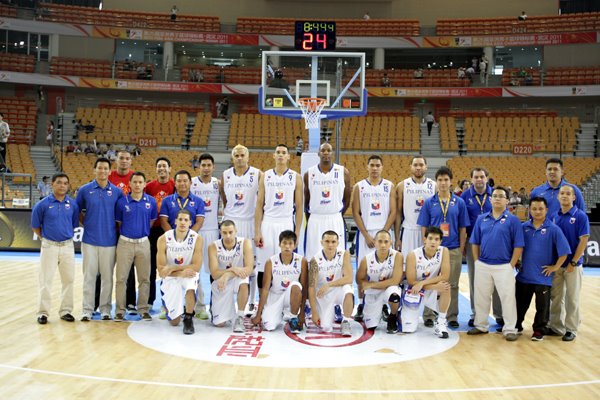