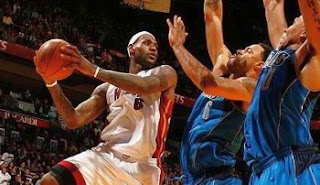 There is no I in the word Team
Though the Mavericks was clearly built around Dirk Nowitzki, but as hallmark of past NBA champions (think of the multi-titled San Antonio Spurs or the 2004 champion Detroit Pistons) it wasn't centered on one or a trio of superstars but rather played as one intangible unit. Their halfcourt plays punctuated by constant passing and players moving for the cut.
Miami had James, Bosh and Wade but if you look at how they play it reminded you of what once ailed our pro-laden Philippine basketball team, a group of superstars thinking they can overpower, outmaneuver or outsmart the opposition with their skills one-on-one. A zone defense can only be defeated by a patient ball movement and fluid team play sadly which Miami failed to display particularly in the dying moments of Game 6.
Greatness is ultimately determined by character
Poor Lebron James, the league's brightest star but in games or quarters where it mattered the most, he slips into a black hole particularly when he disappeared in the 4th quarter of Game 6. Contrast this to Jason Kidd an aging veteran who sinks three-pointers not in regularity but usually does it when the game is on the line just like in game 6.
James Yap could be very well our version of Lebron James in terms of basketball talent, he is not labeled as "the King" for there are many others better than him but sportswriters have a special nickname for James Yap, they call him Big Game James, for he usually is at his best in very crucial games, The reason he wins championships in the PBA. That "big game james" character sadly cannot be said of Lebron.
Also Lebron for all his talent and his years in the NBA never developed a consistent outside shooting ability. The way Michael Jordan evolved from a high-flying acrobatic player to a potent all-range player.
Sure Lebron can hit those acrobatic shots, force opposing guards to commit turn-overs but in the hands of great teams who can play good defense (no more acrobatic layups) and run great offense (no turn-overs thus no thundering fastbreaks) when the game grounds to a slow half-court pace that's the time when Lebron's hype is slowly unmasked.
A winning system wins championships
The Mavericks were once called the Mavewrecks. They once owned the NBA's worst record and were simply in the bottom heap. That is until Mark Cuban, the fiery businessman bought the franchise and instituted changes, he bought in players like Steve Nash and Dirk Nowitzki among many others. In a short span of time Dallas became a top NBA team which usually posts 50 wins in the regular season.
The championship is the fruition of Mark Cuban's efforts, he never wavered in bringing the best people players or coaches in the ball club.
Miami meanwhile took the shortcut method, it had considerable success in its first crown during the second year of Shaquille O'neal's stay in Miami. Sure they got the big three. but had not invested well in coming up with a cohesive supporting unit like what Boston had in their 2008 championship year.
The beauty of the 3-point shot
Dallas shot 51 three-point shots in the series. This tells a lot. Other than giving you much-needed points, consistent outside shooting allows the Mavericks to break the Miami's tight defense, it extends the area which Miami defenders would need to cover thus allowing easy incursions like the ones made by JJ Barea and Jason Terry