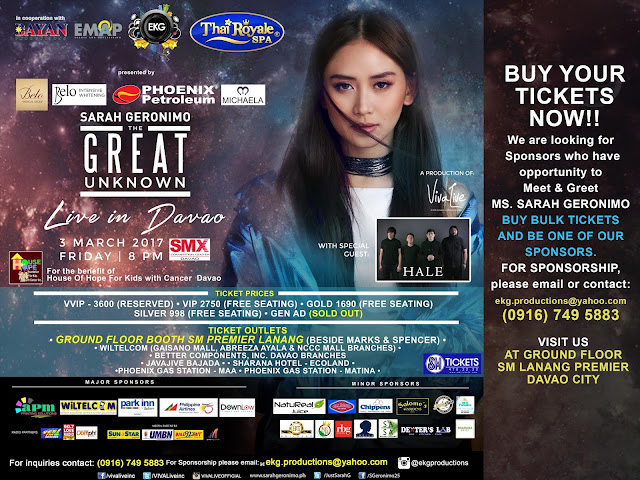 Sarah Geronimo further expands her reinvention with the album "The Great Unknown." The direction of the album leaning towards pop rock that includes collaborations with Hale, Yeng Constantino and Top Suzara (formerly of Freestyle). Not the same popstar princess known for her soaring ballads and birits but as a musician eager to explore and widen her musical horizons.

I really liked her reinvention particularly in her previous album "Perfectly Imperfect" where she tries out danceable electronic-sounding ditties like my super favorite "Kilometro".

This is what I want to see in her upcoming concert this March 3 (Friday) SMX Convention Center, SM Lanang Premier. Titled Sarah Geronimo: The Great Unknown Live in Davao. The concert will feature the band Hale whose vocalist Champ Lui-Pio has Davao roots.


Sarah Geronimo "The Great Unknown Live" in Davao is brought to you by EKG Productions.


NOTE: This March 3 concert is a replacement of the Sarah G. From the Top concert  which was supposed to be held last June 2016 but was postponed. You can use your Sarah G. From the Top tix for the concert without incurring additional costs.
And. and you can win A GOLD TICKET by simply going to https: //www.facebook.com/davaodigitalinfluencersinc/ the Davao Digital Influencers is giving out free Gold tickets go to their page for the mechanics.