Lanzona Subdivision is a sprawling residential neighborhood in the southern suburb of Matina. Adjacent to Lanzona are the middle-class villages of Alpha Homes and Poly Subdivision.

Streets named after Filipino folk dances connect these houses to the main road named after Tinikling- the national dance, the road then leads into MacArthur Highway. The busiest of these Lanzona streets is Subli, taken after a folk dance which originated in Batangas. Subli connects Tinikling with Pandango Street which leads to the villages of Alpha Homes and Poly linking it all the way to the densely populated Barangay Matina Aplaya.


Along Subli Street is a must-try dining destination. Kusina sa Subli is a restaurant which offers a well-known menagerie of Filipino Dabawenyo comfort food- seafood-based dishes along with the familiar pork, beef, chicken meals.

Kusina sa Subli started in 2014, according to the owner Jessica Jane Ongkingco, the resto was conceived to complement the family-owned hotel Residencia de Fernando which is located nearby, the resto was to be some sort of  a food and beverage outlet.

Eventually the resto became a landmark of its own buoyed by the strong reception to its best sellers. Among the popular dishes are its grilled tuna belly and panga (sweet and juicy, grilled just right), tuna pakfry or  pritong buntot (deep-fried to perfection then delectably simmered in vinegar.) 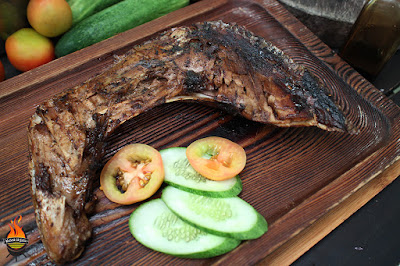 One of the reason why I keep coming back is perhaps  their piece de resistance Kusina sa Subli's Paella Negra which to me is one of the best I tried so far. Another fave meal is their pork adobo.


Low-key and unassuming Chef Rowena "Weng" Ruiz holds the fort at the kitchen churning out Kusina's signature dishes which as Jessica describes, familiar Filipino comfort food with a twist.

One great thing is that prices are reasonable and affordable, with prices ranging from P75 to P200 (tuna panga, belly and buntot prices vary according to size), just perfect for a wallet-friendly evening dining experience with friends or family.


In the latter part of 2015, Jessica decided to enlist the services of friend chef Frine Kristofer Fuentes who had a stint in a de-luxe hotel in Cebu. Frine introduced western-inspired comfort food like the Southside Burger, Chihuawings (Spicy Chicken Wings) and a variant of the Tropical drink.

The new additions was spurred by Jessica's vacation in Dubai when she mistakenly posted a black burger on Kusina's Facebook account, prompting a deluge of inquiries. "When I returned, Frine asked me if we could add some menu, then I thought of expanding it." she recalls.

Aside from good food,  Kusina is also known for their VIP videoke function rooms. Last year Jessica decided to add two more rooms as they had many bookings with their lone function room.

Jessica said that the previous design had the billiard table inside the main function room, some customers would just want to play billiards, hence she decided to make a separate room for billiards. With vacant space in the property two more videoke rooms were added, the songlists are regularly updated to cater to a younger crowd of videoke-goers.

Though Kusina sa Subli is hidden and slightly off the beaten track, its great Filipino/Dabawenyo comfort food is gaining a steady stream of customers willing to make a gastronomic-powered pilgrimage in this part of Matina. Its uncrowded ambiance makes it also a perfect place for a night cap, to sing or just to play pool.

Getting  there: From McArthur Highway, turn to Tinikling Street (at the corner of MacArthur and Tinikling is the former ABS-CBN station now the home of its Bantay Bata 163 Foundation) the fourth street to the left of Tinikling is Subli.